Suffolk has a new Important Stonewort Area: Grove Farm in the Black Bourne Valley. Suffolk Wildlife Trust’s Farm Advisor, Juliet Hawkins explains how the Flagship Pond project has been helping to secure a future for the rare Tassel stonewort

Suffolk Wildlife Trust’s Grove Farm Nature Reserve initially covered 62ha of mixed arable, woodland and marshland with 11 neglected farm ponds. Today the reserve has expanded to 89ha and with funding from the Million Ponds Project in 2010, nine new ponds were created, bringing the total to 20. In 2017 the reserve was awarded Flagship Pond status by the Freshwater Habitat Trust and by the end of the year, it was also recognised as a new Important Stonewort Area.  So what have we done to deserve this exciting news and how as the Flagship Pond project helped us? 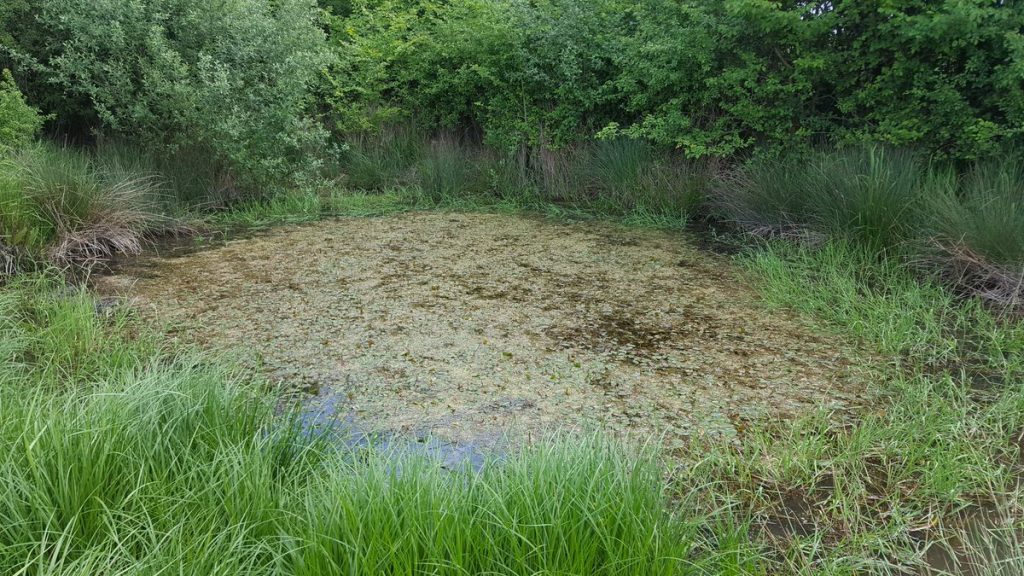 The Tolypella pond at Grove Farm

We restored ponds, we created ponds and importantly, we recorded what we did. Between 2012-2014 a Suffolk Naturalists Society bursary funded equipment that enabled Black Bourne University of the Third Age (U3A) volunteers to help survey ponds for wetland plants, amphibians and aquatic invertebrates. Together we recorded an enormous number of species from different taxonomic groups, and demonstrated what a concentrated recording effort can achieve.  For example, 91 species of aquatic invertebrates were recorded including six microscopic species of water flea; 24 species of water beetle from the tiny 2.5mm Haliplus species to larger 15-17mm long diving beetle Colymbetes fuscus, and three beetles which are Nationally Notable (Nb) Red Data Book species; three species of elegant pond skaters; leeches and many more.  We have recorded every species of backswimmer in Suffolk on Grove Farm, not a common occurrence at one site, and the reserve has 12 species of lesser water boatman, one fifth of the British list. You can read the full report about this project on the Suffolk Wildlife Trust website.

In 2011, after some excellent stonewort training by the organisation Plantlife, I excitedly reported that I had possibly found large clumps of Tolypella intricata (Tassel stonewort) in a restored pond on the reserve.  This is an Endangered Red Data Book species which has only been recorded in two sites in Suffolk since 1860 and elsewhere it occurs in only a handful of sites in the UK. Unfortunately my record could not be verified that year – in fact, not until 2017 when the Flagship Pond project funded the national stonewort recorder Nick Stewart to survey 18 new or restored ponds on the reserve. After considerable ‘fossicking’ Nick was triumphant and found a small fragment of the Tassel stonewort, confirming my 2011 record! He went on to find another Nationally Scarce stonewort: Tolypella glomerata (Clustered stonewort) and three other relatively common species in early succession newly created ponds: Chara vulgaris (Common stonewort), Chara virgata (Delicate stonewort) and Chara globularis (Fragile stonewort).  The discovery of five stoneworts in one site qualifies it as one of Plantlife’s Important Stonewort Areas.

As a result of this find, the Flagship Pond Project helped to fund an experimental translocation of Tassel stonewort to other waterbodies on the reserve, and while we have so many ponds in such early stages of succession this is the perfect time to trial this technique. Receptor ponds were selected on criteria such as water levels, level of cattle access and poaching (management that Tassel stonewort favours), and amount of competition by other aquatic and emergent species.

On 3rd October 2017 a large bucketful of clay and thin layer of surface organic matter was taken from two points at the donor pond (where the stonewort had historically been seen – as oospores are thought to be able to lie dormant for up to 100 years or so, and where it was found in 2017) at a depth of 60cm, and through thick Potamogetan natans vegetation which was then removed, leaving just mud in the bucket. Photos were taken and a translocation form was completed at each of the four recipient ponds indicating aspects that might help draw conclusions on the stonewort’s favoured habitat features. 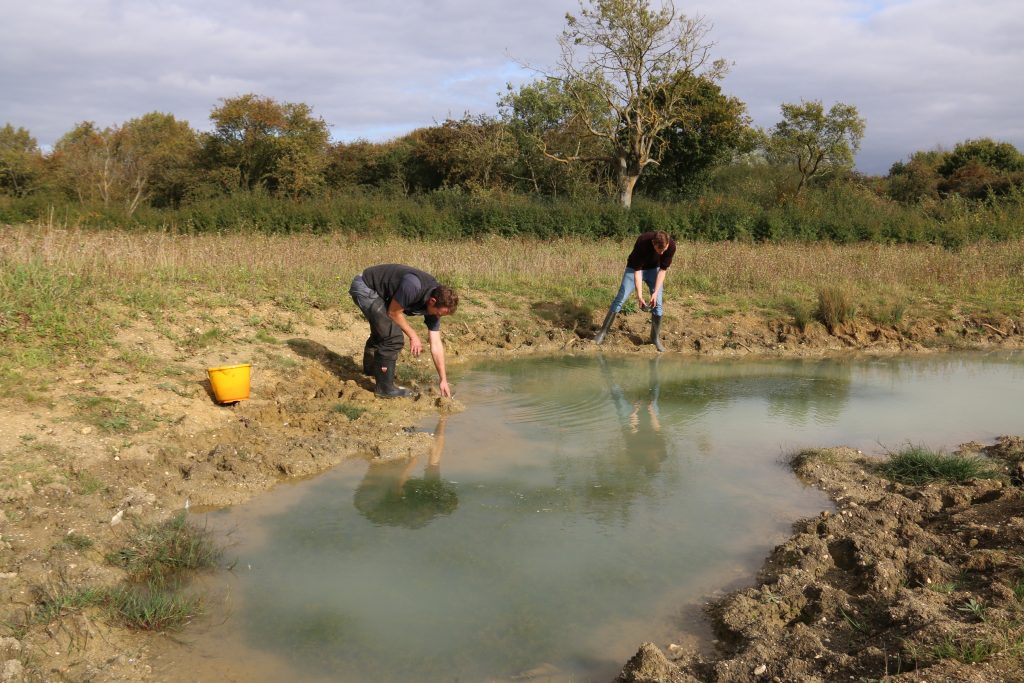 Will it translocate at all and if so, will it do so in the livestock hoof prints or the seasonally dry ‘mini-ponds’ that mimic ditches where it occurs elsewhere in Suffolk? Will it tolerate turbid water, or dense vegetation cover like its donor pond? At this point we simply don’t know! We will return to monitor the stonewort’s progress this year… and the next.

This is a guest post from Juliet Hawkins, Farm Adviser at Suffolk Wildlife Trust