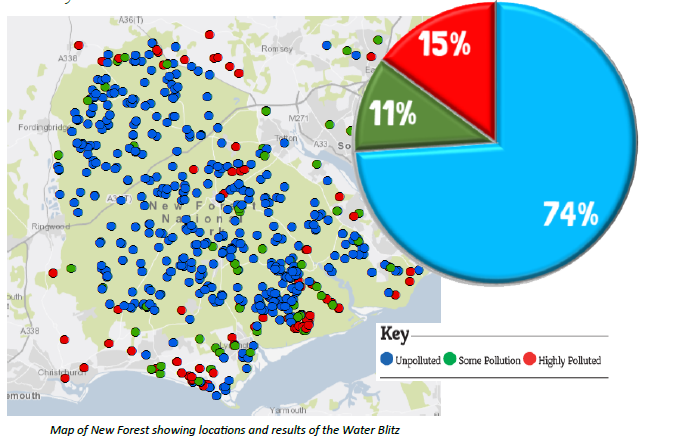 Within the New Forest Catchment the Freshwater Habitats Trust, with the support of the New Forest Catchment Partnership, held a Forest wide water blitz as part of the Clean Water for Wildlife survey. Over the course of three months, 12th March to 12th June 2016, volunteers used quick kits to measure the levels of two widespread nutrient pollutants, nitrate and phosphate. The survey aimed to discover fantastic clean water habitats, free from nutrient pollution, and to reveal the extent of nutrient pollution facing the Forest’s freshwater life.

Volunteers collected and tested 675 water samples from across the New Forest and surrounds for nitrate and phosphate. In total 314 ponds, 13 lakes, 277 streams, 19 rivers and 35 ditches were sampled.

The results show what a truly outstanding freshwater landscape the Forest contains. Just under three quarters (74%) of sites showed no evidence of nutrient pollution; they are clean water habitats. This contrasts very markedly with other lowland catchments, such as the Ock (Oxfordshire), where a similar water blitz showed that over 70% of freshwater habitats were affected by pollution. The clean water habitats in the Forest were dominated by ponds (54%), but there was also a large number of clean water streams (36%) and some clean water lakes and rivers, quite a rarity in lowland England. The traditional management for hundreds of years and its multiple conservation designations has been a shield to much pollution in the New Forest. This has meant it has remained generally much less polluted than most of the English countryside; a clean water gem.

The survey is far from over and the New Forest Water Blitz is being repeated this year. The results will be available shortly. You can keep up to date with news from the New Forest Catchment by subscribing to Water News, the catchment newsletter.