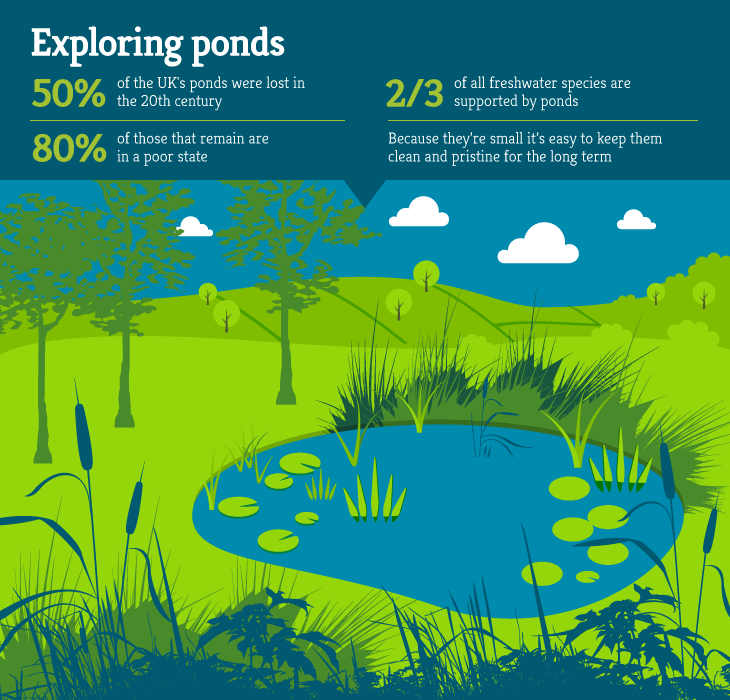 A pond can be defined as a body of water (normally fresh water, but occasionally brackish), which can vary in size between 1 square meter and 2 hectares (this is equivalent in size to about 2.5 football pitches), and which holds water for four months of the year or more.

Many ponds have been created by people, however, there are plenty of examples of ponds that have been sculpted by nature, for example, by meandering rivers or eroding glaciers, or by a tree falling over, leaving the root pit exposed, or even by the action of animals, such as wild boar.

Where are they found?

Ponds are found in gardens, towns and villages, countryside on farmland, floodplains and heathlands; in woods, on grasslands and on moors.

What can you find living in a pond?

Why are they important?

Ponds can make a large impact on the big environmental issues that affect us all: climate change, flooding and pollution. All this, as well as being fantastic for wildlife!

Ponds support an extraordinary two thirds of all freshwater species, and creating clean new ponds is one of the simplest and most effective ways to protect freshwater wildlife.

What we’re doing to help

We want to make sure that the benefits of small water bodies are recognised in policy, both in the UK and worldwide.

We work with other bodies to highlight the importance of small waterbodies in the water agenda, such as with the Blueprint for water campaign group.

We are now using these small habitats to make a big difference. Over the last 10 years we’ve begun to make networks of new ponds as part of the Million Ponds Project – with the ultimate aim of getting back to the million ponds that once enriched the British landscape 100 years ago.

But these aren’t any old ponds – they have clean water: no links to dirty streams, no run-off from intensive farmland or roads, and they go into places where it’s easy to keep them clean – a woodland edge, a riverside meadow where their wildlife can thrive. It’s a simple recipe that works!