Bowness-on-Solway is a tiny 7.3 ha Nature Reserve located close to the Solway estuary and mosses in North Cumbria.

Managed by the Cumbria Wildlife Trust, the site originated as a gravel quarry from which extraction ceased in the 1970s, and now contains numerous permanent and seasonal ponds and pools within a matrix of grassland and scrub bounded on three sides by agricultural land.

The ponds are a major feature of the reserve, notable for their population of Pond Mud Snail Omphiscola glabra, a seriously declining species which is typically found in clean, nutrient poor waters, and favours seasonal water bodies or drawdown zones around more permanent ponds.

The ponds also support an impressive wetland flora indicative of clean-water habitats, including widespread but declining wetlands herbs such as Bladder Sedge Carex vesicaria, Marsh Pennywort Hydrocotyle vulgaris, Lesser Spearwort Ranunculus flammula and Marsh Speedwell Veronica scutellata. The flora suggests the reserve has good hydrological integrity and there is little indication that it is impacted upon by surrounding land use.

In spring the ponds are alive with populations of amphibians, including Great Crested Newts Triturus cristatus and Common Frogs Rana temporaria which breed in the ponds. From late spring through to autumn an variety of  dragonflies species can also be seen on the wing including the impressive Emperor Anax imperator, Britain’s largest dragonfly, as well as Four-spotted Chaser Libellula quadrimaculata, Common Hawker Aeshna juncea and several species of damselflies such as Common Blue Enallagma cyathigerum, Azure Coenagrion puella and Emerald Lestes sponsa. 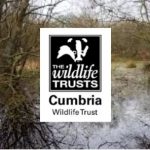 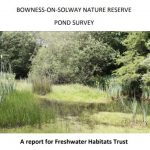 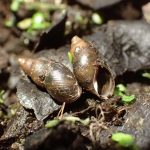