In June and July, Anne, our Northern Project Officer, teamed up with FHT friend and collaborator Dr Barry Wright and members of the Yorkshire Fern group to check out the Pillwort on two of our Flagship Pond sites, Strensall and Skipwith NNR.

Last year we embarked on the Pillwort & Pond Mud Snail Project in Yorkshire with the help of grant from the North Yorkshire and York Local Nature Partnership Community, so we wanted to follow this up to see how it was doing, especially as it had been such a dry summer in 2018.

Strensall Pillwort Pond in July 2018….completely dry but still with lots of Pillwort around the edges.

On Strensall the first visit was to Pillwort Scrape, one of the best ponds for Pillwort in North Yorkshire. In 2018 the pond completely dried up, but the edges were still carpeted with Pillwort, and the team managed to translocate material to several suitable ponds on the reserve. A year later and the pond has refilled, but there was very little sign of Pillwort, just a few small patches. Quite a worrying situations which gives us more reason to try and establish populations on other ponds in the area. With the Help of the Yorkshire Fern Group we will continue to monitor the situation.

Strensall Pillwort Pond in June 2019….full of water but with very little Pillwort.

Moving on to neighboring Towthorpe Common the ponds where we had translocated Pillwort in 2018 were revisited. As the water levels were very low that summer, Pillwort was planted on the edge of the waterline and subsequent visits during that season revealed that it had taken and was putting out runners.

Revisiting the site in 2019, the team found the pond almost completely full so the Pillwort couldn’t be see it as it was about a foot underwater. We are hoping that it’s still there and again we’ll continue to monitor. We took then opportunity to transplant further sections of Pillwort higher up the bank to see how that fairs.

Over to Skipwith NNR and there are a lot of changes from this time last year. During the 2018 season we surveyed the reserve to locate suitable translocation ponds. Unfortunately all the candidate ponds were completely dry so we were unable to translocate Pillwort that season.

Like Strensall there is only one pond on the site (that we know of!) where Pillwort is thriving, even though it was once quite an abundant species on the reserve. Pillwort on Horseshoe Pond was only re-discovered in 2017, up till then we thought it had been completely lost from the site. The original ‘Pillwort Pond’ which in the 1990’s was carpeted with the plant, hence its name, has over the last few decades lost some of its biodiversity and this rare fern through encroaching tree cover and silting up. In 2017 with a grant from LYTAG Landscape Enhancement Fund, we worked with Natural England to take steps to de-silt the pond and remove some of the encroaching tree cover. In 2018, a digger was brought in again to remove more silt and take out some of the larger trees which were directly overhanging the pond. It’s is now nice and open so we are hoping that Pillwort may be able to get re-established.

Back to Horseshoe Pond…our ‘new’ Pillwort Pond on Skipwith. Again, like Strensall, last year the pond completely dried up, so when Anne and Barry visited in July there was a concern that the they would find the Pillwort in a bit of a sorry state. Happily that wasn’t the case and the team found it doing very well and expanding its range within the pond.  The previously earmarked translocation ponds were also looking good, water wise, so the team were able to move Pillwort  into six different ponds. We just need to cross our fingers now that some of it takes hold!

On another positive note, one of the new scrapes dug out in 2017, were given a helping hand back in February 2019, when a small amount of Pillwort from Horseshoe was transplanted. It was great to see that after five months it was thriving and putting out runners…..hopefully a new colony has been established.

Many thanks to  Dr Barry Wright and a dedicated team of volunteers from the Yorkshire Fern Group. With their help we’ll be able to continue monitoring the Pillwort on these two important sites to secure its future.

Also a huge thank you to Barry for his excellent drone photography.

For more information, please click on the links in the image galley below: 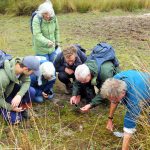