Starfruit: Glimmers of hope for an endangered water plant

This summer (2020) starfruit Damasonium alisma appeared at the National Trust’s Headley Heath site in Surrey for a second year, following scrub and vegetation clearance in 2018. One of Britain’s most distinctive and endangered water plants, starfruit is named after its six-pointed star-shaped fruits.

The plant has retreated over the last 150 years to just a handful of heathland ponds in southern England – it once grew as far north as Yorkshire. This decline seems to be linked to ever increasing nutrient pollution, the decline of grazing (starfruit needs bare open ponds) and, more recently, the spread of New Zealand pigmyweed which has invaded many of its remaining sites.

Freshwater Habitats Trust has been working to protect the species for nearly 30 years and the pond at Headley Heath is part of FHT’s Flagship Ponds programme, which aims to protect ponds which are a critical part of Britain’s freshwater biodiversity. Headley Heath itself is owned and managed by the National Trust. 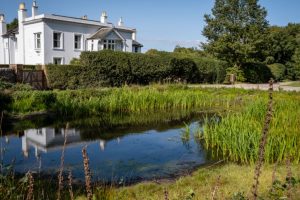 Starfruit is famed for its very long-lasting seedbank – with plants often appearing after many years apparent absence, usually following extensive pond de-silting, dredging or scrub removal which disturbs the seedbank. This effect, first noticed in Plantlife’s ‘Back from the Brink’ programme of the 1980s and 1990s, led to some optimism that simply giving the historic ponds a vigorous ‘haircut’ would save the species. In practice, the situation proved more complicated as the revived plants often found themselves growing in ponds which no longer provided the right conditions for the species: polluted, swamped by New Zealand pigmyweed and no longer grazed, the ponds could not provide the open and competitor free, disturbed conditions that starfruit needs. This led to concerns that, unless it could be guaranteed that the plants would flower and set seed regularly, disturbing their ponds would merely hasten the species ultimate extinction in Britain as seedbanks were gradually exhausted.

The pond management at Headley Heath followed careful investigation of the seedbank which showed that rather few viable starfruit seeds still remained, and care was taken to ensure that as many seeds as possible were retained during the management work. We hope that two years of good starfruit flowering and fruiting will already have helped to replenish the pond’s dwindling seedbank, but whether the plants will continue to flourish above ground remains a critical question. 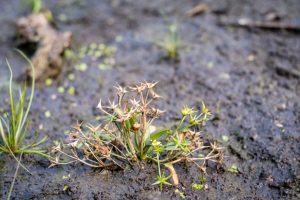 Although starfruit has been thought of as a ‘boom and bust’ species, appearing in abundance after pond management, then dwindling to nothing within a few years, the ‘bust’ may not be inevitable. Almost certainly it has occurred in earlier attempts to manage starfruit ponds because the dredged ponds lacked the traditional pond-edge grazing and poaching, or other disturbance, that naturally maintains the bare substrates, with little organic material, that starfruit loves.

At Headley, enthusiastic support from the National Trust’s site manager, and additional input from national expert Richard Lansdown, makes us optimistic that we will be able to provide these conditions and allow the plant to make regular appearances, building up, rather than depleting, the seedbank. Certainly, at nearby experimental introduction sites in new ponds, where bare sediments and clean water provide perhaps ideal conditions, the plant is appearing annually and in some abundance.

Attempts to prevent starfruit’s extinction in Britain have provided many useful lessons, not least the need to treat ecological ‘facts’ with healthy scepticism. In Britain, starfruit is ‘known’ to be a species of lowland ponds on acid sands and gravels. Why then have official – and some unofficial – translocations to clay-based ponds been the most successful? On the continent, starfruit is far more catholic in its choice of substrate, so perhaps our ‘knowledge’ of starfruit in the UK is merely an artefact of the nature of the plant’s last strongholds here, rather than a reflection of its true preferences. 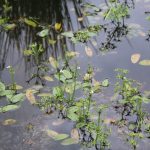 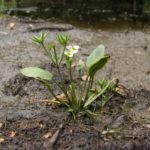 Starfruit…Extinct plant brought back to life!