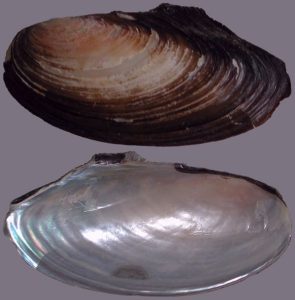 The Depressed River Mussel is a rare, green or brown river bivalve (meaning two-shells). People are often more familiar with the Swan Mussel Anodonta cygnea or the Duck Mussel Anodonta anatina, and most will never be fortunate enough to see this rare cousin. Depressed River Mussels can grow up to 80mm (3 inches) in length, which is smaller than Swan and Duck Mussels. The shell is wedge shaped, with the umbo (the rounded knob) positioned to one side. It gets its name from its compressed appearance; the two sides of the shell are closer together than in either the Swan or Duck Mussel and look like someone has squeezed the two shells together. Depressed River Mussels also have an alternating (staggered) double row of ridges spreading out from the umbo. These ridges are weak, poorly defined, and not staggered, in both the Swan and Duck Mussels.

Depressed River Mussels are only ever found in large running water habitats; large lowland rivers, large ditches and canals. They will co-occur with the other large mussel species in these habitats but are never found in ponds and lakes where both of the other species can be found. Depressed River Mussels live in amongst the bottom sediments of river habitats and tend to be better fixed in the substrate than other mussels which makes them harder to survey. New survey techniques, like eDNA (environmental DNA), may provide an easier and more cost effective approach to monitoring.

The Depressed River Mussel can be found in Oxford in the River Thames, Seacourt Stream and Bulstake Stream. The species faces many threats including pollution and dredging. It is of particular concern, as it is rare or threatened across most of its European range and it is listed by IUCN as globally Vulnerable. In the UK, estimates indicate that the species distribution has declined by approximately 30% in the last 100 years but despite this the UK is still thought to support one of the healthiest populations in Europe and therefore UK populations are of high nature conservation value.