Artist, and Freshwater Habitats Trust’s favourite froggy photographer – Julia Page, speaks about her pond, and the joy it has brought.

Moving house is always traumatic and sometimes heartbreaking. That’s how it was for us back in September of the year 2000 when we had to leave behind our garden pond and its fifty plus froggy occupants. 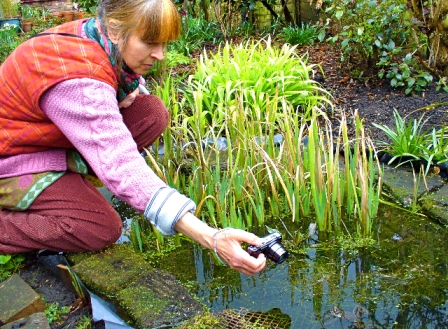 There wasn’t a pond at the new property, so shortly after we moved in, I made one, stood back and waited. No frogs came though and by March of the following year my pond lay silent and still.

One morning, approaching our local bus stop, I noticed a very large clump of frog spawn just lying on the pavement in front of me. I wondered how this strangely Biblical deposit might have arrived as there were no ponds in the immediate vicinity and the blob looked far too big and heavy for a heron to carry. When I got off the bus on the way home the spawn was still there so I quickly scooped it up into a handy carrier bag, brought it home and triumphantly plopped it into the waiting pond. Two or three weeks later, hey presto! Lots of tadpoles were happily swimming around and we haven’t looked back since. Some mature frogs soon discovered the pond and laid spawn the following year and it wasn’t too long before frogs of all sizes were visiting and claiming the pond as their own. Other creatures arrived too, such as newts, damsel flies, dragon flies, daphnia and water snails. Many birds have visited including some rarer species such as a redpoll and in May time, our pond becomes a starling jacuzzi!

Sometimes the spray whizzing up in the air at one of their sessions looks like we’ve acquired a dramatic new water feature. The pond is also a vital watering hole for local foxes especially in the warm, dry weather of summer when we frequently notice a significant lowering of the water level overnight.

Our not so new pond has been going for over twelve years now and the annual highlight is the first mild day at the end of February when I can get my camera out and photograph the pond coming to life again after the long, cold winter months. This year though, because we experienced a SECOND winter in March, our frog friends retreated for five or six more freezing weeks. Happily, they’ve just re-appeared to complete unfinished business and looking completely unaffected by the topsy-turvy season. I find that they are very willing photographic models especially if I get right down to their level and CROAK ! It is the shear variety of their faces that is so intriguing, each one having their own individual expression. Even after such a prolonged and bitter spell of weather, their infectious smiles tell me that nature is very resilient and all is well in Frog World.