We had a great time with ‘The Water Detectives’, a willing bunch of over 120 Key Stage 2 pupils, helping them learn about what makes a good pond, testing water quality and collecting eDNA samples to find out which creatures live in their ponds. Working in small groups, the children from each class took it in turns to undertake two investigations to prepare a plan of their perfect wildlife pond:

Using cutting-edge Clean Water Kits, the Detectives collected water from their school pond to measure the amount of two naturally occurring nutrients, nitrate and phosphate, in the samples. At natural background levels these nutrients are essential for life. But, in today’s intensively farmed and built environment, excess nutrients are entering the water cycle from fertilisers, detergents, waste water and livestock. Freshwater life needs clean, unpolluted water to survive, and sadly it only takes a little nutrient pollution to damage habitats like streams and ponds.

The Detectives’ results were compared with water samples from a range of freshwater habitats, including; a stream flowing through ancient woodland; a river flowing through farmland where a crop of wheat was growing; a pond in a large area of natural uncultivated heathland; a fishing lake surrounded by roads, and rainwater collected from a water butt in a city garden.

The Detectives used state of the art eDNA Kits to find out which freshwater species – amphibians, fish and birds – were living in their pond. Some species can be hard to find – they may be very rare, they may only come out at night, or they may live their whole lives underwater. This means that traditional methods used to survey ponds, like using a pond net, can often miss them.

Collecting water samples to carry out the eDNA survey

Environmental DNA (eDNA for short) is DNA, the genetic code of all living animals, shed into the environment as creatures go about their daily lives. The DNA is released into the water by animals in a host of different ways: from their skin, poo, mucous, eggs and sperm, or when they die. With these kits it is now possible to monitor the freshwater species that live in ponds, streams and other waterbodies simply by collecting a water sample, and analysing it for traces of DNA.

Finally, with the Clean Water and eDNA testing completed, the Detectives were asked to draw a picture of their pond, marking on the best features for wildlife and making suggestions on how to improve it.

To find out more click on the links in the image galley below: 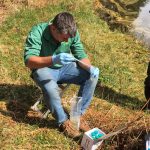