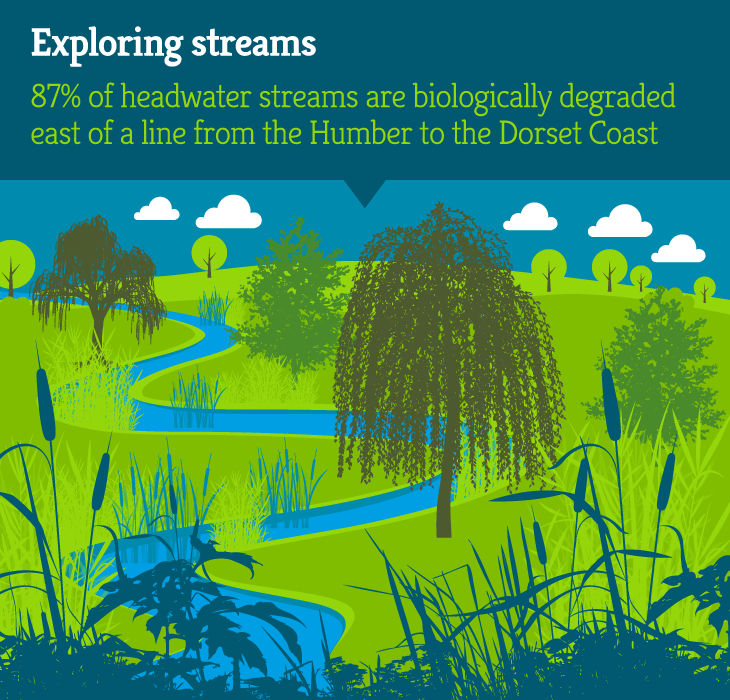 Streams are small running waters mainly formed by natural processes, although they are often substantially modified by human activity.

We define them as waterbodies shown on UK Ordnance Survey maps as a single blue line, representing waterbodies less than 8.25 m wide. They are distinguished from ditches in (i) usually having a sinuous form; (ii) not following field boundaries, or if they do, pre-dating boundary creation; (iii) showing a relationship with natural landscape contours, e.g. running down valleys.

Streams don’t always have water in them! It is quite natural for the first part of any stream to be seasonal, depending on the year. In dry years, the headwaters of streams naturally dry out, creating a different but valuable aquatic environment. In some hot parts of Europe, temporary streams have highly specialised assemblages of endangered species, including fish!

Where are they found?
There are streams all over the country; there are about 175,000 km of streams.

What can you find living in a stream?
Streams support a range of plants and animals that depend on running water, as well as generalists that can be found more or less everywhere. Pristine, clean, unpolluted streams can be important nursery grounds for trout and salmon; they’re often home to the Bullhead as well. Now, in some parts of southern England, small streams may be the last refuge for native crayfish that have otherwise been wiped out by crayfish plague. The surprisingly large larvae of the Golden-ringed Dragonfly are typical of small acid streams.

Why are they important?

Streams are important because – like rivers – they provide habitats for plants and animals that depend on running water including young salmon and trout, lampreys, native crayfish, the golden-ringed dragonfly and cool water stoneflies.