Freshwater Habitats Trust is led by the Senior Management Team

Dr Jeremy Biggs is the co-founder and CEO of the trust. Jeremy has over 25 years experience in the field of freshwater biology. His research interests focus on the maintenance of aquatic biodiversity at a landscape scale, and how different land management practices can mitigate the effects of pollution on the water environment. He leads several large partnership projects such as the Water Friendly Farming initiative and the Million Ponds Project. He is a member of the National Advisory Board of the Environment Bank Ltd, of the Research Advisory Group for the Defra Demonstration Test Catchments Project, and is a trustee of Wildlife and Countryside Link. He is also actively involved in the voluntary wildlife recording sector and is life member of the British Dragonfly Society.

Pascale has worked with the trust since 1999 as a freshwater biologist. She has extensive experience of wetland plant and macroinvertebrate surveys, ecological assessments and monitoring, pond creation and management, and catchment management. Pascale has a particular interest in protecting and restoring freshwater habitats at the landscape scale. She works closely with partners and landowners on practical projects in various parts of the UK, with a focus on pond and floodplain wetland creation.

She is a member of Freshwater Habitats Trust’s Senior Management Team, the National Coordinator of the Million Ponds Project, steering group member of the European Pond Conservation Network (EPCN), and trustee of the River Thame Conservation Trust (RTCT). Since February 2018, Pascale is the interim CEO of the Newt Conservation Partnership (NCP, part-time secondment).

With a background in ecology, conservation and geology, Penny has worked for the trust for since its creation as a freshwater ecologist, with particular interest in translating science into practice and making a practical difference to the ecological quality of freshwaters. 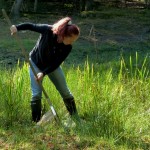 Naomi is a freshwater ecologist with a particular interest in macroinvertebrates, temporary ponds and the freshwater habitats of the New Forest. Her work takes her all over the country undertaking surveys to determine pond quality and provide pond management and pond creation advice; and many of you will know her from the training events we organised for PondNet. She also undertakes research for the Freshwater Habitats Trust, often in partnership with other organisations to protect our rarest species such as the Tadpole Shrimp and Great Crested Newt, to determine the impact of invasive non-native species like New Zealand Pigmyweed, and increasing our understanding of water quality issues to develop sustainable strategies for the protection of freshwater landscapes like the New Forest.

David joined in 2021, after working as an ecological consultant for over six years. As a botanist, David is enthusiastic about all plants whether they like their feet wet or not, but finds what plants do when things start to get soggy particularly exciting! Wetlands, especially rich-fens, are one of David’s main areas of interest. At Freshwater Habitats Trust he works on habitat restoration and creation, botanical surveys and research. As well as working at Freshwater Habitats Trust, David is the Botanical Society of Britain and Ireland (BSBI) county recorder for Oxfordshire, surveying the county’s plants, managing BSBI’s data and working with other local volunteer botanists since 2016.

Anne joined the team in 2015 to work within the People, Ponds & Water Project. She has a longstanding interest in freshwater habitats following a childhood spent hanging around ponds in a pair of wellies searching for her favourite creatures – frogs, newts and toads. These day she also loves getting out and about in the countryside in her motorhome, an ideal vehicle for transporting pond dipping & butterfly nets, bat detector, mothtrap and assorted ID guides. She particularly loves getting close to rivers and canals and can generally be found, whilst out on riparian walks, skulking under bridges looking for otter spraint.

Pete joined Freshwater Habitats Trust in 2015 as Project Officer to coordinate the People Ponds and Water (PPW) project in Central England – a highlight of this work was trialling experimental plant translocations, helping to develop techniques for restoring threatened wetland plants such as Starfruit, Greater Water Parsnip and Tassel Stonewort. Pete’s professional background is in catchment scale work and he is enjoying working on Natural Flood Management projects in the region, ensuring evidence gathered through the Water Friendly Farming research project is put into practice. Pete is also seconded to the Newt Conservation Partnership (NCP) part-time, delivering habitat creation for the GCN District Level Licensing pilot scheme across Bedfordshire, Milton Keynes and Buckinghamshire.

Francesca joined the Trust in 2013 to help with the development of the PondNet survey project, as this got absorbed into the People, Ponds and Water project Francesca then acted as the Southern Project officer for this project covering an area extending from Cornwall to Kent! Francesca has worked on a number of other projects and is currently taking a lead role in the organisational communications. In her spare time Francesca enjoys walking in the countryside.

Gemma joined the team in September of 2018 as Project Assistant to the New Forest team.  Gemma has been actively involved in the New Forest for over 10 years in a number of different roles and projects from managing volunteers for the Forestry Commission to woodland management and restoration for the New Forest Land Advice Service.  Gemma has a keen interest in freshwater habitats and through her monitoring role with the Wetland Restoration team has established citizen science projects in the New Forest including the Riverfly Monitoring Initiative and Modular River Surveys.  She has a fascination for rare and unusual species and in her spare time monitors Marsh clubmoss for the Species Recovery Trust, and Noble Chafer for Buglife and is always equipped with her camera ready to capture the next specialist plant or insect when grubbing around in her wellies.

Holly joined the team in 2019 and is seconded to the Newt Conservation Partnership where she helps to create, manage and monitor habitat for great crested newts as part of the NatureSpace District Licensing scheme. Since completing an MSc in Ecology, Evolution and Conservation, Holly has developed a broad knowledge base and interest in conservation and ecology through working/volunteering for a number of conservation organisations including the Bat Conservation Trust, Whale and Dolphin Conservation and Heal Rewilding. 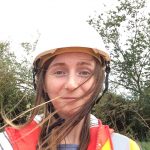 Hannah first joined the Trust in April 2015 assisting on the national People, Ponds and Water project. Through this she was able to expand and explore her love of freshwater creatures and plants, and was able to visit some of the most stunning ponds and freshwater landscapes in the country. She later moved to River Thame Conservation Trust, catchment hosts with FHT in the Thame Catchment. There she project managed the first wetland creation of it’s kind in the catchment, set up catchment wide volunteer survey networks and coordinated multiple community engagement projects. In 2020 she rejoined the FHT team as Project Officer. As well as delivering on projects her duties include joint coordination of the River Thame Catchment Partnership with the River Thame Conservation Trust.

Emily joined the Trust in 2020, on a full-time secondment to the Newt Conservation Partnership. In this role, she is focussing on habitat creation for great crested newts, based in Bedfordshire. She has previous conservation experience from working in varied roles for the National Trust, RSPB and local council. In her recent MSc dissertation, she studied the habitat requirements of great crested newts and is excited to continue to focus on this species.

Catherine joined the Trust in November 2020 moving into conservation administration from a career in school business management. Previously working for a large Oxfordshire educational academy trust she has experience in people, financial and premises management, administration, systems management, HR, communications and safeguarding. Prior to this she worked in international conference and event management. With two teenage sporty sons, a Labrador and good boots, she spends as much of her spare time as possible outdoors. In her current role she is determined to support and facilitate as best she can those practically working to improve and deliver better prospects for biodiversity.

Peter joined the trust in October 2021. He has previously worked at various institutions including Oxford Brookes and the Open University. He is also Hall Manager for Old Headington Village Hall and has his own Oxford walking tour. He has been based in Oxford for many years, although he has also worked abroad in India and Spain. He enjoys football, cycling and travel.

Kate joined the Trust in 2021, undertaking a partnership role with the Nidderdale AONB as a Priority Ponds Project Officer.  Kate came to us from ecological consultancy where she gained experience surveying for great crested newt among other species. She has an honours degree in Environmental Science through the Open University, and an MSc in Biodiversity and Conservation from the University of Leeds.  Kate has previously volunteered with the Trust, surveying her local ponds as part of the PondNet project, and carries out voluntary surveys through the Yorkshire Amphibian & Reptile Group.  Though professing a fondness for amphibians, Kate has a broad ecological background and is also a bat carer through the Bat Conservation Trust.

Make a difference for freshwater wildlife