Freshwater Habitats Trust teamed up with the Yorkshire Dragonfly Group again this summer to run Dragonfly Walks on two of Yorkshire’s finest Flagship Pond sites, Strensall and Skipwith NNR. A walk, led by Yorkshire Dragonfly Group, also took place at Foxglove Covert, another Freshwater Habitats Trust Flagship Pond site.  All provided a great opportunity to engage with the public and introduce eager locals to the delights of these wonderful reserves and the flying insects that inhabit them.

In July, YDG’s Keith and June Gittens, along with Anne our Northern Project Officer, had a brilliant day out at Strensall Military Training Area and World’s End with eleven locals out in force. The day started with slightly dull weather but it was still quite warm and at our the first port of call, the most accessible pond on the site close to the car park off Lord’s Moor Lane, an abundance of Damselflies greeted us, including Large Red Pyrrhosoma nymphula, Azure Coenagrion puella, Emerald Lestes sponsa and Blue Tailed Ischnura elegans Damselflies . We also had a really good showing of Ruddy Darters Sympetrum sanguineum. Searching the undergrowth proved fruitful with several exuviae, the empty exoskeletons left after the dragonfly has emerged, found clinging to vegetation around ponds. Keith and Anne were happy to introduce the new Freshwater Habitats Trust booklet ‘The Dragonflies of Strensall and Foxglove Covert’ to the group, a legacy of the Heritage Lottery Funded Flagship Ponds project. It proved to be a big hit with the group and enabled them to quickly get to grips with Dragonfly and Damselfly ID.

Getting to grips with our new Dragonfly Booklet

Moving on, the group headed on from the Military Training Area to World’s End, one of the best areas for Dragonfly spotting on the common. Over the last three winters Freshwater Habitats Trust have teamed up with members of the Yorkshire Dragonfly Group and the Yorkshire Branch of Butterfly Conservation to carry out scrub clearance for the benefit of dragonflies and butterflies. It was fantastic to be able to showcase the achievements of the volunteer group and to get first class views of our flying friends skimming around the ponds. As well as an array of damselflies flitting around the emergent vegetation we were treated to an aerial display of Dragons including Emperors Anax imperator , Four-Spotted Chasers Libellula quadrimaculata, Black-tailed Skimmers Orthetrum cancellatum , Brown Hawkers Aeshna grandis, Common , Ruddy and Black Darters Symetrum striolatum, S. sanguineum, S. danae. We also managed to get viewings of the Red-eyed Damselfly Erythromma najas, a recent coloniser at Strensall, holding territory on the floating pondweed.

One of the ponds on World’s End.

June and Tony, nets in hand, managed to catch several species and with Keith’s expertise in dragonfly handling, everyone got a close look at these fabulous insects.

Next stop, two Dragonfly walks back to back over a weekend in early August, starting with a walk organised by Foxglove Covert LNR, another Flagship Pond site owned and managed by the Ministry of Defence. Anne again joined Keith and June to explore the ponds on the reserve accompanied by thirteen Foxglove Covert volunteers and visitors.

The group were also fortunate to get great views of our longest British Odonata, the stunning Golden-ringed Dragonfly Cordulegaster boltonii . In total thirteen species were seen and again June and Tony rose to the challenge netting several species, so that everyone could get a good close up view!

The team reconvened at Skipwith Common the following day for the second Flagship Pond Dragonfly extravaganza!  Another warm and sunny day with a fantastic turnout of twenty six folk including several dragonfly experts from the Yorkshire Dragonfly Group.

This year there was plenty water in the ponds and the group managed to see fourteen species in total. As it was so warm and sunny, our netting experts June and Tony had their work cut out, trying to catch the insects for close up views. However, as the day progressed quite a few species including Migrant Hawker Aeshna mixta and Common Hawker Aeshna juncea where found obligingly hanging out in the gorse bushes, providing great photo opportunities!

The day finished with a really good display by one of our most inquisitive and colourful species the Southern Hawker Aeshna cyanea.

Our thanks go out to Keith and June Gittens of the Yorkshire Dragonfly Group for helping us bring the delights of these wonderful creatures to so many people on these three very special Flagship Pond sites.

To find out more, please click on the following image links: 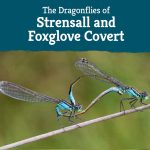