At the beginning of July, prime minister Boris Johnson suggested that we need to spend less time surveying newts to speed up development and boost the economy, saying that “Newt-counting delays are a massive drag on the prosperity of this country.”

But new data from a large-scale Great Crested Newt conservation scheme in the South Midlands, run by NatureSpace in partnership with Local Planning Authorities as part of Natural England’s new District Licensing approach, shows that delays are no longer an issue. 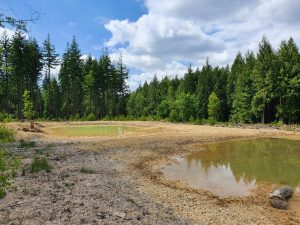 In the South Midlands, development delays due to newts have been eliminated for developers who join the scheme  – down from Government estimates of 14.5 weeks for the old Licensing system to a maximum of just 10 days – effectively the time it takes developers to join the new newt conservation scheme. In many parts of the country developers can now choose to join schemes which remove delays and have better outcomes for newts.

In fact, developers no longer need to count great crested newts at all. Virtually all ‘newt counting’ can now be replaced by ‘new technology’: environmental DNA (“eDNA”) surveys and computer modelling of newt distributions are now done before any development work is even proposed. In the South Midlands this is co-ordinated by NatureSpace which brings together the local planning authorities, expert conservation organisations (Freshwater Habitats Trust and Amphibian & Reptile Conservation, working together as the Newt Conservation Partnership), eDNA testing pioneers NatureMetrics and scientists at the University of Kent. The work is regulated by Natural England.

eDNA surveys (see Note 2) of Great Crested Newts are used to create accurate computer models of newt distribution covering every inch of the planning authority’s area. Then a colour-coded ‘risk map’ is created to show where newts are more, or less, abundant. Developers are charged according to the impact they will have on the newts or their habitat. Charges are higher in the red and amber zones, and lower in the green and white zones. This money funds creation and management of high quality newt ponds and land habitats in parts of the landscape that will not be developed, with landowners funded to look after the habitats long-term.

Planners and developers can also use the maps to actively avoid ‘red zones’ where newts are likely to be commonest. In the new District Licensing scheme for each pond lost 8 new ponds are created, along with new terrestrial habitat where it is needed. And at those sites where newts are expected to be most abundant, traditional mitigation measures (catching and removing newts to safety) are still used.

Critically for conservationists – the outcomes should be far better for great crested newts. The old system could not only cause development delays but was disastrous for Great Crested Newts. Reviews of mitigation project outcomes showed that, although hugely expensive, most failed to protect the animal they aimed to conserve.

Crucial to the success of the work is that the new habitats are of the highest quality (like the ponds we described in Biological Conservation recently). For this reason, high quality designs and detailed monitoring have been a key part of the new approach from the start. In the South Midlands scheme we know that already, after just 2 years, 60% of the sites where new high quality ponds have been created have already been colonised by Great Crested Newts.

As an added benefit, developers can be confident they are protecting much more than newts. Making new high quality newt ponds is some of the most effective of conservation actions and has ‘unprecedented’ benefits for freshwater life generally, not just newts. This is important because freshwaters are amongst our most threatened ecosystems.

Dr Tom Tew, the CEO of NatureSpace, who leads the South Midlands scheme said: “We think that this new District Licensing scheme already delivers much better newt conservation without any of the previous problems and delays for developers. This is exactly what we’re doing right now across the Midlands and soon in many other parts of the country”

Dr Jeremy Biggs of Freshwater Habitats Trust said: “With the new District Licensing scheme we have the scope to create ponds in the best places and make new high quality unpolluted habitats. This contrasts with the crappy ponds often created next to developments in traditional mitigation for development schemes which were often polluted, and which evidence shows, were a disaster for Great Crested Newts.

Dr Tony Gent of Amphibian and Reptile Conservation said: “With so much of our wildlife in steep decline, we need to ensure that species like the Great Crested Newt are helped back to recovery. With new and innovative approaches, supported by a sound understanding of the species, we can create a more robust and strategic approach to nature conservation. This provides us with the tools to ensure that we can both ‘build greener’, and also ‘build faster’.