The River Ock Catchment Project is working to protect and restore freshwater and wetland habitats, and to manage the catchment to reduce flooding and diffuse pollution.

The River Ock is a tributary of the Thames in Oxfordshire. Its catchment (map below) is typical English countryside with heavy clay, used mainly for modern industrial farming, superimposed on a landscape of small villages and country towns, ancient woodlands, and rivers, streams, ponds, meadows and marshes, whose history can be traced back for 5000 years.

A map showing the extent of the Ock Catchment (in blue)

Freshwater wildlife in the Ock and Thames is under severe pressure from our modern ways: pollution, drainage and climate change mean that plants and animals are still disappearing from this landscape. The problems facing freshwaters in this area are a microcosm of larger threats to the water environment – and show how hard it is to combine our economic lives with the protection of the natural world.

The River Ock Catchment Project is led by the Freshwater Habitats Trust, working alongside organisations and communities across the area. The project works in partnership with a wide range of local people and organisations, including those concerned with farming, flooding, wildlife forestry and fishing. As well as the Ock itself, the area also includes the Thames valley around Oxford with its famous riverside meadows. The work is part of the Defra-supported Catchment-based Approach, and has been funded to date mainly by the Environment Agency, which the project works closely with.

The River Ock Catchment Project is working to protect and restore freshwater and wetland habitats, and to manage the catchment to reduce flooding and diffuse pollution. We are doing this by:

We are also using the Ock catchment as one of the test-beds for our national Clean Water for Wildlife project.

As well as trying to improve rivers – as set out in the rules of the Water Framework Directive – we are also placing special emphasis on the conservation of freshwater wildlife more generally. We’re doing this by raising awareness of the importance of small waterbodies, like ponds, small lakes, ditches and headwater streams, as well as bigger lakes and rivers. Small waters are largely excluded from the Water Framework Directive, but because they support the widest variety of freshwater plants and animals, including many endangered species, they are critical to the protection of freshwater life generally.

Greater Water-parsnip, Sium latifolium, is a threatened plant that is clinging on in the Ock catchment

Click on the images below to find out about the Ock Arable Project, read the latest Ock Catchment Partnership newsletters and access reports and resources relating to the Ock catchment. 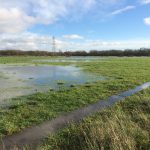 Become a Friend for Freshwater

Help us protect freshwater habitats with a regular gift.

Find out about us

Find our more about our work in our brochure