Named after its flea-like fruits that ‘spring’ off when touched 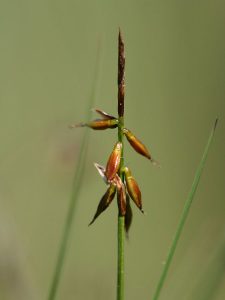 Flea-sedge is named after the appearance of its fruits which, when ripe, look like a cluster of fleas attached to the stem. The fruits are shiny and dark brown in colour, have a characteristic ‘beak’ at the end, and will ‘spring’ of the stem when touched. Each plant has a single bractless spike with an inflorescence made up of a terminal male fruit and 3-10 female fruits below which curve downwards when ripe. The stems of this sedge are slender, cylindrical, and without ridges. The leaves are 5-25cm long, dark green, grooved, and quite rigid.

Flea-sedge prefers damp or wet conditions on neutral or calcareous soils and can be found in unimproved pastures, wet meadows, fens, wet dune-slacks, and wet heaths.

Flea-sedge is listed as Least Concern on the Red Data Book for Great Britain as it is widely distributed throughout Great Britain with high densities in Northern and Western areas. However, due to threats such as drainage and destruction of damp meadows and pastures, this species is declining in lowland areas and is listed as Near Threatened on the Red Data Book for England. In Oxfordshire, Flea-sedge is listed as a rare species and has only been recorded at three sites in the county since 2010.