Tawny sedge maybe widespread throughout the UK, but it is rare in Oxfordshire. 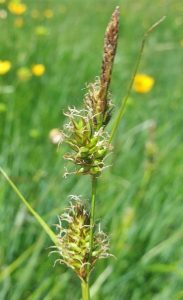 Tawny sedge is a shortly rhizomatous, loosely tufted sedge which produces yellow/brown flowers from May-June. The leaves are a bright yellow-green colour. Male and female flowers are clustered in separate spikes, separated on a long upright inflorescence with terminal males spikes. The fruits are small (5mm long) and turn yellow/brown. The fruits are subtended by a brown scale-like structure (glume) which has a narrow pale border and green ribs.

Tawny sedge grows in base-rich wetlands in short, open and typically species-rich vegetation, and can be found in a range of peatland habitats where flushed with base-rich groundwater, as well as damp meadows.

This plant is widespread in the UK, but is most common in Wales and Scotland. In England, it is most frequent in the south-west and upland northern areas, occurring in other areas where there are concentrations of wetland habitat, such as in the New Forest and Norfolk.

In England it is listed as Least Concern, however there is evidence of local declines. Tawny Sedge is rare in Oxfordshire, it is found in less than 10 sites across the county. Land drainage and poor management practices are threats to this sedge.