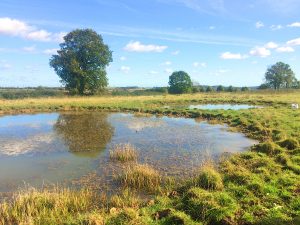 A 9-year project showed that creating just 20 clean water ponds across a 10 km2 area of farmland increased the number of wetland plant species by more than a quarter (26%). The number of regionally rare plants almost trebled (a 181% increase). Species that were largely extinct in the wider countryside returned once more (see Note 1).

The benefits were an order of magnitude greater than observed using other, more traditional, biodiversity enhancement methods that were also tested. The ponds were also one of the cheapest interventions costing just £1500-2000 each to create.

Lead author Penny Williams from Freshwater Habitats Trust said, “The gains we saw are unprecedented for freshwater and are, by a long way, the largest recorded improvements in freshwater diversity seen from adding land management measures to countryside landscapes.

“Our previous work had already shown that ponds were a secret treasure in the British countryside – with a value out of proportion to their tiny size – however the scale of benefits from adding new ponds took all of us by surprise.”

The peer-reviewed findings, recently published in the journal Biological Conservation, are the first major results from the Water Friendly Farming project: a long-term collaboration between the Freshwater Habitats Trust, Game & Wildlife Conservation Trust, the University of York, the Environment Agency and landowners in three Leicestershire catchments.

If the ponds had not been created, freshwater plants would have declined by 9% (1% per annum) across the region during the survey period.

Dr Jeremy Biggs, Freshwater Habitats Trust Director, said, “This is such an important result: freshwater biodiversity is under threat both across the UK and the globe. Climate change will wreak even more havoc in future years and up to now we have found very few ways to combat losses and make the countryside more resilient. (see Notes 2 and 3).

Biggs continued: “This study is unique because we’ve proven that it’s possible to increase freshwater biodiversity significantly at a regional scale. Up to now benefits have either been very limited, or very local.”

The project also tested a range of more traditional measures used around the world for protecting freshwater biodiversity. This included adding woody debris to streams, damming-up ditches to create pools that slowed water runoff and trapped sediments, and building interception ponds to filter out nutrients and other pollutants. Together, these measures had some biodiversity benefit, but an order of magnitude lower than the clean water ponds.

Prof Chris Stoate from Game and Wildlife Conservation Trust said “It’s clear that the key ingredient to success was carefully locating new ponds in places where they would fill with clean water. To get the best effect we sited them in low intensity pasture, scrub or woodland – areas unaffected by agricultural or road pollution. Measures in other locations and with other functions didn’t work half so well.”

The project team believe that creating clean-water ponds speciﬁcally targeted for biodiversity could hold great potential as a tool to help stem, and even reverse, ongoing declines in freshwater plant biodiversity across agricultural landscapes.

The work was funded by the Environment Agency.

For further information or to interview a spokesperson please contact: Jeremy Biggs, 07590 030610.

Ponds are often assumed to be synonymous with gardens and village greens. In fact, ponds have been made by natural processes for millennia, as well as being created by people. In Britain they occur in all landscapes from the coast to the tops of mountains.

Ponds are the most numerous of all freshwater habitats, with an estimated up to 3 billion globally. In the UK, and probably elsewhere, ponds support a wider variety of species than rivers or lakes but are largely ignored from water protection legislation. The Water Framework Directive, Europe’s most important water legislation, specifically excludes all waterbodies less than 50 ha, so effectively excludes all of Europe’s roughly c.10 million ponds.

About The Allerton Project – Game and Wildlife Conservation Trust

The Allerton Project’s aims are to research the effects of different farming methods on wildlife and the environment, and to share the results of this research through educational activities. The Allerton Project has been working to this end for the past 25 years. More information about the results of the first two decades of research is available in Fields for the Future, which also outlines the educational activities the organisation is involved with.

Other pictures are available for publication: 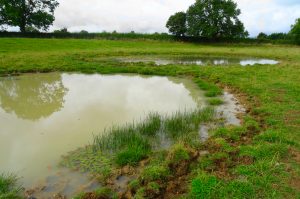